The poem of A Night Mooring near Maple Bridge was written by the Zhang Ji, who was a poet of Tang Dynasty. In this poem, Zhang has described that the midnight bell ringing of the Hanshan Temple or The Cold Mountain Temple. Since that time, this temple has become very famous and especially for its Buddhism culture and bell rings.

This temple is situated at about three miles or five kilometers from the Fengqiao Old Town of Suzhou. It is said that during the Tang Dynasty, a famous monk Han Shan had came to take the charge of the temple and hence this temple was named after him. It was originally built during the Liang Dynasty and was repaired in the following dynasties. It covers an area of about three acres or 10,600 square meters and represents the architectural style of Qing Dynasty. It includes Sutra Collection Building, Grand Prayer Hall, Fengjiang Pavilion, Bell Tower and Tablet Corridors. In the year 1995, a five storey Buddhism pagoda which is about 138 feets in height and called as Puming Pagoda was erected. It became the symbolic building of this temple. There are many other historical relics in this temple like statue of han Shan, the stone tablet inscription of A Night Mooring near Maple Bridge poem and few other tablet inscriptions written by some famous intellectuals of ancient China. 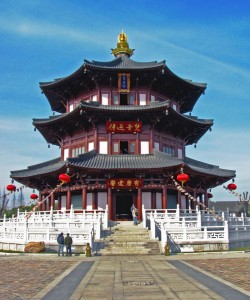 Hanshan Temple is one of the most famous temples in the Chinese history and often boasts about its bell rings. This bell was modeled in the year 1904 which is not on the tower. Every year on the Eve of New year of Chinese lunar calendar, this bell is tolled for praying for the safety and happiness of the coming New Year and this festival attracts hundred of tourist from domestic and abroad.

The Hanshan Temple is a Buddhist Temple and the statue of Buddhist Patriarch Sakyamuni is there for people for making offerings in the Hall of Grand Prayer. There are bronze statue of three eminent monks in the Hongfa hall which are Xuang Zang, jian Zhen and Kong hai. This temple is the place where most important Buddhism activities are held.

!–EndFragment–> y steles and tablets, paintings and calligraphies in this garden including some precious artworks from Ming Dynasty.