Su Shi, a famous poet of Song Dynasty said, ‘It is a lifelong pity if having visited Suzhou you did not visit Tiger Hill’. This shows the importance of this local beauty spot having many attractions which this article will endeavor describing for you.

Also known as the Surging Sea hill, the Tiger Hill is a large hillock which covers over three acres or about 14100 square meters and about 36 meters or 118 feet in height. You will find many historical sites which traced back to about 2500 year ago while climbing on this hill. It is a small hill but having rich history. 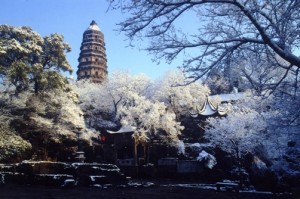 The tomb of King He Lu is famous as in 496 BC during the autumn and Spring Period, He Lu, King of Wu was perished during the war fought against Yue. His son buried him within this hill and after three days after the funeral white tiger came and sat upon the grave as guarding it. Since then, it is being known as the Tiger Hill.

Tiger Hill Pagoda lies on the summit of hill and Yunyan Temple’s Pagoda. It is one of the oldest pagodas in Suzhou and has become a symbol of this city. It has the distinction of being the Leaning Tower of China. It was built during Song Dynasty and is seven storeys after the style of the timber pagodas which was build during the early period of Tang Dynasty. 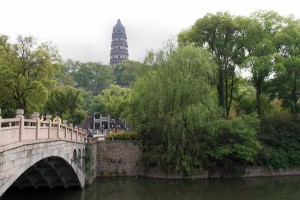 Sword Testing Stone and Sword Pool is the another attractive destination of Tiger hill. King He Lu was a collector of rare swords which he tested them upon this stone. The crevice in the rock is the evidence for the existence of these swords and it is believed that they were buried under the Sword Pool as funerary project. Other interesting places are the Lu Yu well which is famous as Lu Yu has excavated this well and declared that the water of this well is the 3rd best in China and also for the Lu Yu tea growing and consumption. Verdant Mountain Villa and Wanjing Villa are some other attractions.