The Beijing-Hangzhou Grand Canal is also known as the Grand Canal and is the longest and earliest artificial river in the world. This canal is about ten times to that of the length of Suez Canal and about twenty two times to that of Panama Canal. It originates in the north near Beijing and ends in Hangzhou to the south. Five river systems and six provinces are connected by this canal. In history, this canal served as the artery of communication between north and south.  For over 2500 year, many rich historical relic sights have been discovered along this river. Like the Great Wall of China, this canal is regarded as one of the greatest project of Chinese ancient time.

This canal is divided into mainly seven parts having different names- Tonghui River, North Canal, South Canal, Lu Canal, Middle Canal, Li Canal and Jianganan Canal. Each of these canals lies in the different province of China. Scenery along each of these sections of the canal is very charming and worth visiting. However, the sceneries in the Hangzhou Province are most attractive and marvelous. More than 40 sites can be admired and they include various museums, squares, parks, bridges, temples and local residences. 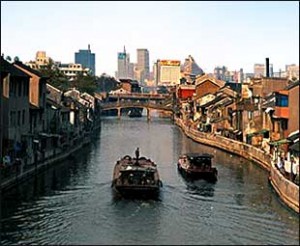 You can take a cruise on the Grand Canal in the section where it passes through the Jiangsu and Zhejiang Provinces. The first ever cruise line on Grand Canal was launched in the Wuxi City of Jiangsu Province in the early 1980s. it has attracted a lot of visitors from worldwide. The line later was expended to more cities which include Changzhou, Suzhou, Hangzhou and Yangzhou.

There are Cruise Ships available on this canal from Yangzhou to Suzhou. In the section of Hangzhou, you can find many Hydro-busses leaving from different wharf offering visitors a chance for admiring the scenery of canal in less than two hours.