Lion Grove Garden is located in the north east of Suzhou city at 23 Yuanlin Road and has a profound cultural background with convenient development advantages. It is one of the four most popular gardens representing gardens of ancient and classical style of Suzhou City. 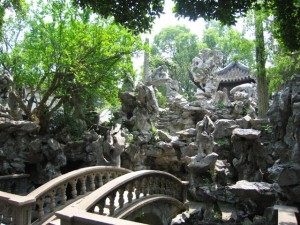 It was built by Monk Tianru and a group of Xen Buddhist disciples in 1342 during the Yuan dynasty in the memory of their master Monk Zhongfeng. This garden has been changed hands and renamed many times. It has significant history as Monk Zhongfeng has apperceived the sutras of Buddhism at the Lion Cliffs on the Xitianmu Mountain in the Zhejiang Province. There are many rocks in the shape resembling Lion in this garden. This garden was given the name of Lion Grove at first and this was changed to the Bodhi Orthodox Temple or Puti Zhengzong in the year 1342. This garden has been a popular center of activities and literati’s and Buddhism activities. Many poems and paintings were inspired by this garden at that time. After the death of Monk Tianru and disbandment of disciples, this garden grew dilapidated day by day. In the year 1589 during the Ming Dynasty, Monk Mingxiang rebuilt the garden and the temple which was seperated during the reign of the Emperor Kangxi of Qing Dynasty. The Governor of Hengzhu, Huang Xingzu bought this garden and renamed it to She Garden. The garden was repaired and decorated by his son Huang Xi and gave a new name Five-Pine Garden in the year 1771. It was again ruined due to the downfall of Huang and purchased by Bei family in the year 1917. Later it became steady and well protected after 1949. 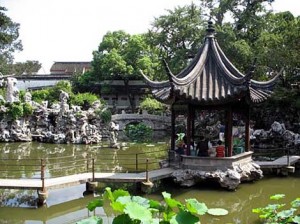 It covers and are of about ten thousand square meter and ideal for site seeing as it has ornamental towers and pavilions in different style and each one having his own story and history. True Delight Pavilion is one of them and is magnificent due to its royal style. The other attractions are Standing in Snow Hall which has a Buddhist story and Pavilion for Greeting the Plum Blossoms where poets and painters indited. There are plum trees all around the pavilion and the utensils and furniture are decorated and carved beautifully with the plum blossom designs. There are many stales and tablets, paintings and calligraphy in this garden including some precious artworks from Ming Dynasty.