For tourists who are in search of a vacation place that has a great value of history, Tombs of the early Tibetan Kings would be the perfect one. It is something different from other travel destinations because it doesn’t only provide a joy of travelling but also a benefit of experiencing and learning ancient history.

Tombs of the early Tibetan Kings are the graveyard of Tibetan Kings ruling from 7th to 9th century. The site is located high up on Mure Mountain. In 3 square kilometers, it consists of nine massive mausoleums that stand as a symbol of great history of ancient Tibet. The earthen structures, square shape, flat-high are variable in sizes. The massive tombs were high up, square shape, and flat tops. Thousand years later, the figures have changed into round, flat on the top and even eroded due to weather and wind.

Some Tibetan Kings who occupy the tombs are Manshongman Tomb, Songtsen Gampo, Hedezhuzhan Tomb, Tride Songsten, Trisong Detsen, and Lang Darma. The most popular mausoleum is of Songtsen Gambo. It consists of nine chambers. One of them is used as Buddhist hall. A unique thing in this hall is the coral lamp that never runs out of light, placed in the centre of the hall. The story says that the corner of Songtsen Gambo’s tomb was used to keep treasure. The king’s phenomenal achievement was to unite the Tibetan tribes and joining hands of Tibetan and Han people. He was the one who made Lhasa as the capital. Therefore, the city was chosen to be his tomb. Other two main tombs are of Dusong Mangbujie and Chide Songzan. 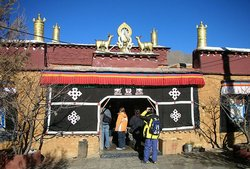 The tomb is surrounded by an outstanding environment. Open ground all around, rich soil, fantastic landscapes are adding the beauty of the Tombs. It is as well popular for its moderate weather. Its outstanding location is incomparable. Right on a plateau it stands.  During sunset is an excellent time to enjoy a stunning natural sight of the site.