Sera Monastery is an outstanding Monastery of Tatipu Hill in Lhasa city. The name ‘sera’ is derived from Tibetan language which means ‘wild rose’. The story has it that when the monastery was built, the back hill of monastery was full of bloomed roses. That is why it is called so. 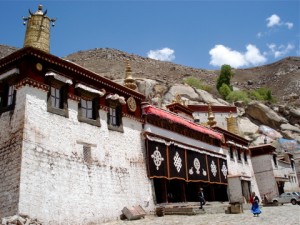 The great Sera monastery is 28 acres big. Its three main parts are Kamcum (dormitory), Coqen Hall, and Zhacang College. What makes the three buildings special is the artistic value in it. From fine statues, unparalleled murals, scriptures made of gold powder, up to scent cloth are significant values of these consructions. Sera is distinctive, compared from other monasteries for it is the place where debates regarding Buddhist doctrines is held.

The dormitories, Kamcun, are the place where the monks dine and rest. Kamcun has a total thirty three dormitories of different sizes surrounding a central yard. The division of Kamcun is based on the monks’ original place.

Coqen Hall is the main assembly hall in Sera monastery. Various religious rituals are held here. The hall has 125 pillars that dispersed in 0.5 acre area. Five chapels in the hall are as salute for Maitreya, Sakyamuni, Tsong Khapa, Arhats, and Kwan-yin. Not only that, the greatest possession of Sera monastery is the Gangyur of Tripitaka that reach 105 volumes out of 108 original volumes. The priceless holy books were a gift by a Ming Dinasty Emperor, Chengzu. 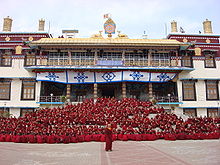 Zhacang College is the main destination for the monks who want to learn about Buddhist classis. The college is divided into three, Je zhacang, Ngaba zhacang, and Me zhacang. The smallest as well as the newest one is Ngaba zhacang is preserved as prayer site for Jamchen Choey, the founder. The oldest one, Me zhacang now functions as preserved fresco.

The best time to visit Sera monastery is during the Sera Bengqin festival. It is a religious festival of transferring blessings of Buddha to the monks. The festival is leaded by Dalai Lama. The festival takes place on December 27, Tibetan calendar. It comes around the month of February, Gregorian calendar. Another time is around Shoton festival which comes on August. During the festivals, a great opportunity is open for locals and tourist to worship Buddha.