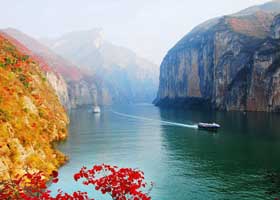 Qutang Gorge, also called Kui Gorge, lies in the Chongqing province, is the shortest Gorge among the Three Gorges. However, it can be the most majestic one of them, and it is the gateway where visitors travel eastward reach in the Three Gorges. It is about 500 km northeast down the Yangtze from Chongqing and about 200 km upriver from Yichang. And it covers 8 kilometers downstream length area from Baidicheng (White Emperor City) in the west to the Daxi Town in the east.

Qutang Gorge is well known for not only its steepness but also its magnificence in spite of its shortest length when comparing to Wu Gorge and Xiling Gorge. There are 2 main amazing scenery spots for the Qutang Gorge: Kuimen and Rhinoceros Viewing the Moon. 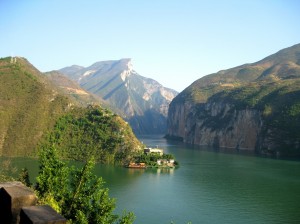 Kuimen : When stepping into the canyon of the Qutang Gorge, you can see two bluffs on both sides are cliffy, with the distance less than 100 meters. Located at the western end of Qutang Gorge, these two steep bluffs are 1300 meters high standing upon either side of the Yangtze River. The shape of the the bluffs look like a slightly open gate, therefore comes the name of “Kui Men”, which is one of the highlight scenery of the Yangtze River, and this is the reason why Qutang Gorge is also called Kui Gorge. The powerful and great Yangtze River will become a small belt when it is passing and winding through Kuimen in Qutang Gorge as the width of the Yangtze River in that area is only about 100 to 200 meters and you can’t imagine the narrowest point here—yes, it is only about 50 meters! There are five words on the bluff : “夔门天下雄 ( Kui Men Tian Xia Xiong) ”, and the solitary and lofty peaks: Mt. Baiyan (White Salt Mountain) in the north and Mt. Chijia soar above the horizon. 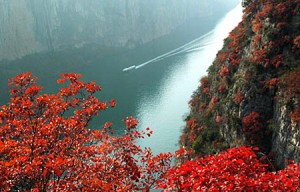 Besides, Baidicheng, also called White Emperor City, is also a amazing cultural and historical site for you to visit during your Yangtze cruise at Qutang Gorge. It is known as “the Poet City”, as there were so many famous Chinese poets have lived here such as Libai, Dufu, Sushi, Luyou and Liuyuxi.

The poet Bai Juyi described the Qutang Gorge in his writing, “The shore looks like two screens. The sky has been cut out.” With its beautiful scenery and unique natural resources, Qutang Gorge is a place worthy a visit and exploring. Just planing your travel to the Yangtze Crusie so as to experience the breathtaking Qutang Gorge in the upcoming Spring, you’ll enjoy yourself there!