It is wonderful, it is fantastic, it is Norbulingka. As the meaning ‘Treasure Park’, Norbulingka is like a joyful heaven in the world. Also known as ‘the Summer Palace’, Norbulingka is a beautiful garden of 360,000 square meters area that consists of 374 rooms. It is located near Kyichu River in the western part of Lhasa, and only 0.6 mile away from the famous Potala Palace. Great Norbulingka garden is the biggest garden, man-made, in the whole Tibet. 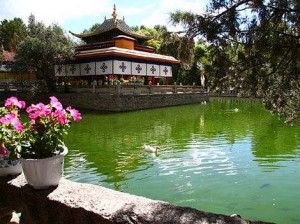 Previously, it was a land of waste and wild animals. Even so, the Seventh Dalai Lama was fond of visiting the area. The Qing magistrate then started building a palace in 1740. Followed by Kelsang Potrang which was built under the order of the 7th Dalai Lama, It was then functioning as the Summer Palace for the significant Lamas, as well as the place for discussing political problems and for festive celebrations. Several renovations have improved the appearance of the Summer Palace. Decorated with pavilions, potrangs, gardens, and woods, the place are just stunning. The good thing is that, since it was turned into an open park, public now can also enjoy the beauty of the park.

Several palace complexes in Norbulingka are Kelsang Potrang, Takten Migyur Potrang, Tsokying Potrang, and Golden Linka. Each palace has three sections; the palace section, the front section, and the woods. 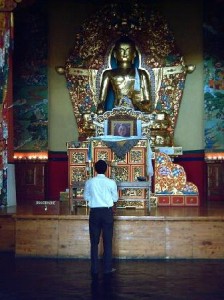 First section, Kelsang Potrang is named after Dalai Lama seventh. This three-storey palace consists of halls for prayer, reading rooms, bedrooms, and sanctuaries. The second palace, Tsokyil potrang was once considered to be the most outstanding one in Norbulingka. For the palace is a stunning pavilion with the Han style architectures. Golden Linka, the third palace was built in 1922. While the next, Kelsang Potrang was built for the thirteenth Dalai Lama along with the plantation of a lot of grass, trees, and flowers. Takten Migyur Potrang was constructed under the supervision of the fourteenth Dalai Lama in 1954. Since then, the place is known as the New Summer Palace. The last palace is distinctive for its unique characteristics. A combination of villa and temple, added the beauty of murals around the palace result in a valuable art. In the northern hall of Takten Migyur Potrang, murals reflect the kind Sakyamuni and his eight disciples. While in southern hall, the murals in comic strips show the Tibet development.