Gandantegchinlen, or is more popular as Gandan monastery is one of important monasteries in Mongolia. It is as well a big tourist attraction. The name Gandantegchinlen means ‘the great place of complete joy’. Alike the name, it is the place.

The bulding process of Gandan monastery was started in 1838 under the supervision of the fourth Bogd Gegeen. Unfortunately, just like other monasteries in Mongolia, the 1937 purges have swept away Gandan. It was then opened again in 1944 in order to show to US Vice President, Henry Wallace. Gandan, the religious monastery has continued to be a ‘show monastery’ for visitors from abroad until 1990. In the same year, full religious ceremonies were held. Afterwards, Gandan functions as a religious monastery. Over 600 monks are the occupants. 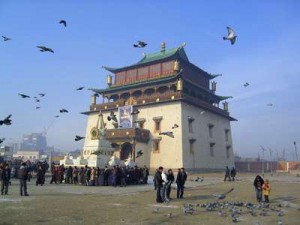 From the main entrance, there is a path directing towards a courtyard with two temples. The famous Orchidara temple or also known as Gandan Sum, located in the northest, is the place to hold important ceremonies. A large statue of Tsongkhapa is placed behind glass, in the end of Kora path. Another significant place is the Didan-Lavran temple. It was the residence of the 13th Dalai Lama during his stay in 1904. The main attraction of Gandan monastery is white Migjid Janraisig Sum. It is a temple which posses over hundred images of Buddha Longevity, Ayush.

In the east part, four colleges of Buddhist philosophy are located. One of them is the Yellow College. It is dedicated to a wrathful Buddhist deity, Kalachakra. 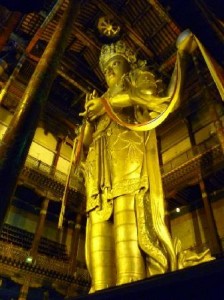 In the west part of Gandan temple is the University of Ondor Gegeen Zanabazar Budhhist, the university was established in 1970. However, it is not allowed for foreigners to have a visit inside.

Taking photos are allowed only around the monastery and inside the Migjid Janraisig Sum. The best visiting time is during the captivating ceremonies that start around 10:00. Being in a holy place, visitors shall be cautious of pickpocketers that are among crowds.