Drepung Monastery is located in the foot of Mountain Gambo, Lhasa. Drepung  is one of “Three Great Monasteries” of Tibetan Buddhism, after Sera Monastery and Ganden Monastery. It covers 250,000 square meters area. The monastery is occupied by 7,700 monks, 141 fazendas, and 540 pastures. Compared to the other monasteries alike, Drepung is considered a a large scale based on the population. 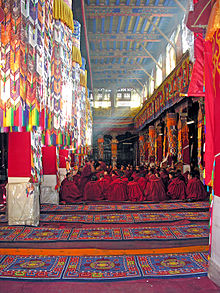 A unique thing about the appearance is that its white constructed grand assembles a heap of rice. Therefore, it was named Drepung than means ‘collecting rice’ in Tibetan.

Drepung monastery has a quite complex organizational system. The main divisions are Coqen, Zhacang, Kamcun, and Mycun. On the highest level is Coqen where Zhacan belongs. Kamcun and myicun are under Zhacang. The rule is that, monks belong to Zhacangs are not allowed to blend with the others.

Structures of Drepung are on the temples and caves for Jamyang Qoigyi. It is combined with two great white pagodas with the main buildings in the center. The buildings are Coqen Hall, Ganden Potrang, Tantric Colleges, and Kamcuns.

Located in southwest corner, the Ganden Potrang is the dwelling of Dalai Lama second, third, fourth, and fifth. It was then functioning as the meeting room for both politics and religion regime, after of Dalai Lama left to Potala Palace.

The center part is Coqen Hall. A magnificent Entrance Hall is in the end of wide stone stairs. Fine colorful statues of Buddha, collections of precious sutras, Gangyur Tripitaka written in gold powder, a bronze statue of Qamba Buddha, and sutras of woodcarving are among the rare treasure possessed by the monastery.

Cultural relics in Drepung monastery are effortlessly adorable. In Coqen Hall are the statues of Manjushri Bodhisattva and Sitatapatra. Followed by rare sutras and conch shell of Jamyang Qoigyi those are kept in the same building.