An amazing cultural heritage of Tibet is Damxung Ancient Cave Mural Paintings. Located in the north of Lhasa, it is a great place to live the experience of the ancient world.

The Ancient cave can be reached by motor vehicles from Lhasa. Situated 102 miles away from Damxung County, the trip may take around four hours or more. However, some tourists are more comfortable to have the journey by taking a car because of bumpy roads around the caves. The journey to Damxung Ancient Cave Mural Paintings will pass from the Amazing Grassland Landscape of Nagqu. The beautiful landmark is surrounded by huge mountains creating unforgettable scenery along the way. 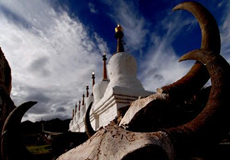 It does not require much effort to find the murals of the ancient cave for it is indeed vast. Mostly, the murals can be found in the cave walls. While some other murals are located on the outer walls and the cliffs. The paintings variety is huge. Over 250 murals are found all around the cave. The murals contain images of ancient life. most common images are various animals of ancient life that close to human life such as wolves, leopard, deer, birds and horses. Besides, other images like the sun, humans, plants, and pagodas are also found throughout the caves. These similar images are combined in murals forming variable themes. Most common subjects are daily life related. It includes hunting, dancing, wars, and caring for the community.

There are two types of paintings in the Damxung Ancient Cave. Those are full painting and outlining. The full paintings show more paints and details compared to the outlining. While the outlines are better in its uniqueness, the primary colors used in mural paintings are red and black. It reflects the limited paintings tools used during the time.

As a tourist attraction or museum for learning ancient history, Damxung Ancient Cave is a great place to see either way.