The six Harmonies Pagoda is situated on the Yuelun Hill which overlooks the Qiantang River and lies to the south of West Lake. It is one of the masterpieces of the architecture of ancient China. This pagoda was originally built during the period of Northern Song Dynasty by the ruler of Wuyue state and a part of which became the Zhejiang Province. The name Liuhe comes from six Buddhist ordinances and it is believed that this pagoda was build in order to clam the tidal waters of the Qiantang River for aiding navigation. In the year 1121, this pagoda was completely destroyed in a battle. 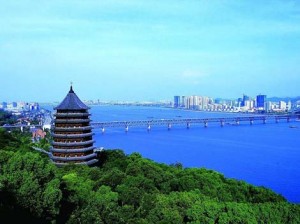 The pagoda present today was constructed using woods and bricks during the period of Song dynasty and subsequently during the Ming and Qing dynasty. Additional exterior eaves have been added to this pagoda. It is in the shape of octagon and about 60 meters or 196 feet in height and it appears like being a thirteen storey structure although it has only seven interior stories. There is one spiral staircase which leads to the top floor and each of the seven ceilings are painted and carved figure which includes flowers, animals, characters and birds. Each storey of this pagoda includes four elements that are exterior walls, zigzagged corridor, a small chamber and the interior walls. When viewed from outside, this pagoda appears to be layered bright on the supper surface and being dark underneath which reflects the harmonious alteration of light as well as shade.

You can have the spectacular view of the Qiantang River Bridge while ascending the pagoda which spans the surging tides of this river. The Six Harmonies Pagoda nearby is an exhibition centre which details the ancient pagodas in China which was set up in the recent years upon the Yuelun Hill. So, you can visit the Six Harmonies Pagoda and learn the various architectural styles of ancient Pagodas which are found within China.