It is high, it is amazing, it is heaven, and it is Potala Palace. Standing beautifully in the central of Lhasa, Potala palace is one ancient palace reaching the sky for its extreme height 12,359 ft. Potala is a Sanskrit word that means “Abode of Buddha Avalokitesvara”. The name is actually inspired by a holy hill in South India.

Not only the name, but the structure of Potala palace is as well beautiful. It is divided into 2 parts, the Red palace in center and the White palace in both wings. 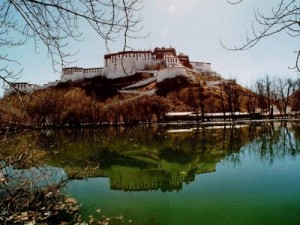 Potrang Marpo, another name of the Red palace is located in the highest center of the palace. As the name, Red palace is painted fully red as representation of power and stateliness. It functions as a place for prayers and religious study. Apart from that, the Red palace has several halls, libraries, and chapels that are connected by galleries and passages. The biggest hall is Great West Hall surrounded by three chapels. The hall is painted beautifully with murals throughout the inner walls. After that, the Saint’s chapel and the Dharma cave are two constructions left from 7th century.

The White Palace, known as Potrang Karpo, is considered as symbol of peace and quiet. Once, the palace functions as office of local government of Tibet also as a residential for Dalai Lama. Located in the 4th floor of the White palace is the Great East Hall. It is reserved for special purpose such as religious events and political functions. Up in the 5th and 6th floors are residential and offices of politicians. While the top one, 7th floor, is dwelling of Dalai Lama. It consists of two, the West Chamber of Sunshine and the East Chamber of Sunshine due to plenty of sunshine.

As a tourism place, Potala Palace values more than refreshment. It is a treasure. Over 300 years, the Palace has been carrying cultures and traditional arts such as stupas, rare sutras, murals, and statues.