Peak Flown From Afar or Fei Lai Fengs stands next to the Temple of Soul’s Retreat or Lingyin Temple and is one of the Famous tourist sites in Hangzhou in Zhejiang Province. There are many legend related to the name of this peak.  There is a legend that an Indian monk, Huili arrived in this valley about sixteen hundred years ago and was very much impressed by the peak dissimilar from any other valleys and he believed that this peak had flown over from India because of its shape as it was common in India. However, he was unknown from the fact that this peak would have flown to this place far from his country. Hence, this peak is known by this name from that time. 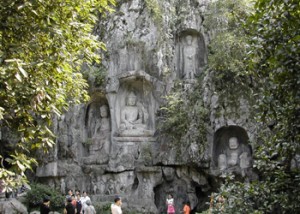 Fei Lai Feng is about 700 feet tall and it is a pure limestone mountain which is very much distinct from the Sandstone Mountains around it. Large stones are scattered along this peak which resembles animals like running elephant, flying dragon, fleeing monkey and crouching tiger. There is a pavilion on the other side o the peak which is called Cui Wei and was erected for immortalizing the national hero Yue Fei. He has contributed greately in the war against the Jin Tribe during the period of Southern Song Dynasty. This pavilion was destroyed many times and finally restored in the year 1942.

The caves of this mountain are having 330 stones statue which dates back to the 10th and 14th centuries. The statues appear in many poses like standing, sitting and sleeping. There is one statue of Laughing Buddha which sits on the Cliff along the stream with the belly and breast exposed. If you wonder that why he has such a big belly then it is his belly where he keeps all the troubles of the world. This peak has destroyed many villages before settling down in Hangzhou and in order to prevent the peak from causing more damage, more than 500 statues of Buddha has been carved for suppressing it.