Beijing-Huangzhou Grand Canal or the Grand Canal is the oldest and longest canal of the world and surpasses the Suez and panama Canals which are the next two giant canals. This canal stretches from Beijing in the North to the Hangzhou which is the capital of Zhejiang Province in the South. In its journey, it flows through Beijing, Hebei, Tianjin, Jiangsu, Shandong, Zhejiang Provinces and the way for interconnecting the five rivers that are Yellow, Haihe, Qiangtang, Huanhe and Yangtze Rivers.

This Grand Canal was one of the greatest engineering projects of ancient China. It is also very precious human heritage which is left by the ancestors. In the year 604 AD, the Emperor of Sui Dynasty, Yangdi left his capital city of Changan which is today known as Xian. He cruised to the Luoyang City which interested him and the next year he moved his capital to Luoyang and ordered to build the Great Canal. After six years and efforts of thousands of laborers, many small canals were connected to form the Great Canal which is about 1,764 kilometers in length. Since then, the Great Canal has played significant role in the history, transportation of goods and foods from south to north China and promoted the defense as well as administration of China and strengthen the cultural and economical exchange between the North and South in China. 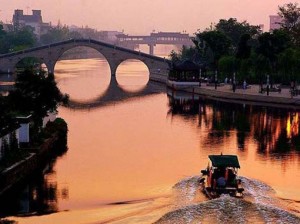 The Grand Canal illustrates the advance technologies of shipping and water conservancy of ancient China and has given birth to many famous towns and cities. Along with the Great Wall of China, it is very much reputed and one of the two magnificent projects of the ancient China and thus it is renowned worldwide.

If you want to enjoy the attractive scenery of this Great Canal then you can take a boat from the old Chinese Canal. You will get the landscapes of the typical river towns of southern China as well as stone bridges and ancient dwellings of traditional designs and historic relics. You can also get the some delicious foods and experience the great culture.