Zhouzhuang Water town, situated in the Kunshan City is the most famous water town in China. It is about 30 kilometers to the southeast of Suzhou. It has profound cultural background, elegant watery view, well preserved residential houses of ancient times and strong local customs and traditions. Zhouzhuang was the part of fief Yaochen and known as Zhenfengli in the autumn and Spring Period during 770 to 477 BC. Ti was donated to the Full Fortune or Quanfu Temple by Zhou Digong which was a very devout Buddhist in the year 1086, during the Northern Song Dynasty; it has got its present name in the memory of the donor. 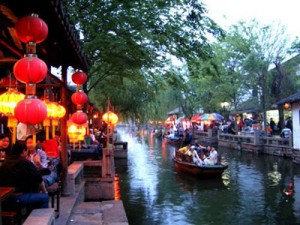 It has an area of about half of a square kilometer or 124 acres and 60 percent of structure of Zhouzhuang was built during the period of Ming and Qing Dynasty. You can have the breathtaking sights by taking the convenient transport in Zhouzhuang, gondola.

Zhouzhuang is divided and surrounded by many lakes, rivers and bridges along the rivers which show distinctive views of the water town. The twin Bridges Yongan Bridges and Shide bridges are most famous and considered as the symbol of Zhouzhuang. Twin bridges look like the old style Chinese key. Fuan Bridge was built in the year 1355 during the Yuan Dynasty and is located at the eastern end of Zhongshi Jie. It is combination of single arch bridge and towers of this bridge are used as tea rooms, stores and restaurants. It is the best place for appreciating the views while taking a rest. 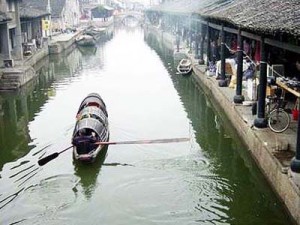 Shen house is located at the southeast of Fuan Bridge and was built in 1742. It was private property of Shen Wansan who was the first millionaire of Jiangnan or the South of Yangtze River during the early of Ming Dynasty. This has architecture of Ming Style and covers are area of about two thousand square meters. It has over 100 rooms and divided into three sections. Each section is connected by the aisles and arcades. The first on is the water gate where the family of Shen washed clothes and moored boats and middle part has the tearoom, gate tower and main hall. Other attractions include Zhang House,  Milou Tower and Hengxu Taioist Temple.