Yue Fei’s Tomb is situated at the Southern foot of the Qixia Hill. This tomb has been build for the commemoration of Yu Fei. In the year 1961, the State Council declared it as the major national protected monument. General Yu Fei was the national hero of the Southern Song Dynasty and distinguished himself in the battle against the northern invaders. He was sentenced to death after he was framed for the crime which he did not commit. 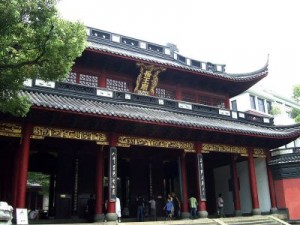 This tomb is situated on the bank of the Lake Yue the northwest corner of the West lake. The Yue Fei’s temple looks towering and lofty.  It is made up of three parts which includes tomb ground, Devotion Garden and Loyalty Garden. The stature of Yu Fie lies inside King Yue’s Temple and there is a plaque hanging which inscribed in the calligraphy of Yue “Recover Our Lost Territories” right above the statue. The Devotional Garden is dedicated to the parents, wife and sons of Yue Fei and it serves as the Yue Fei’s memorial hall. The tomb of Yue Fei’s gounds situated on the left side of the Loyalty Garden. This tomb is in round shape and built with rocks. There is the tomb of his son besides it. On the Tomb ground’s Screen wall there are four big Charcters caved in Chinese “Be Loyal to the Motherland” which is the life time motto of Yue Fei. 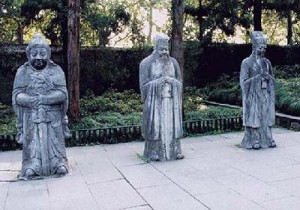 There is a path on both the sides which leads to the tomb and having stone tigers, stone horses, stone figures and stone sheep which dates from the Ming Dynasty. Below the stages of these path there are four cast iron staues of the traitors” Qin Hui, Prime Minister of Sothern Song Dynasty; Wang Shi, his wife; Zhang Jun, a general and Moqi Xie, a court official. All these four statues kneel down in pair and their hands are tied behind their back. There are over 125 carving or steles which includes some poems by some prominent personality throughout history expressing their respect for this nationa hero as well as some Fei’s calligraphy.