Taklung Monastery is just 120 kilometers away from Lhasa. It is a stunning structure of red brick that combines beautifully with the greenery of grass that surrounds it. Even more outstanding, are the over thousand prayer flags on top of the monastery waves in the wind as a symbol of deep faith. This 800 year old monastery was an important place of the Kagyu Buddhist. At present, many pilgrims visit to have a spiritual experience.

Originally, Taklung monastery was the dwelling of over 7,000 monks who follow Kagyu Buddhism. They spent their lives by doing meditation, prayers, and reflection. Rites and ceremonies are as well conducted regularly by the monks. Taklung monastery monks are known to obey a strict prayer of meditation and they avoid eating all meat. In order to follow their strict rule and to focus on the prayer, no women were allowed to go inside Taklung monastery. A nunnery located nearby is especially built for those women pilgrims who come for religious visit. 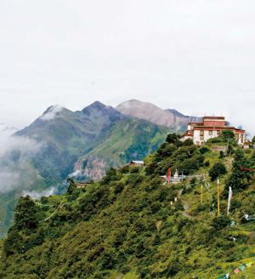 Stand strong till present doesn’t reflect that there was some damage of the monastery. It was even destroyed once during the Cultural Revolution. It was then rebuilt by hard work and spiritual courage of locals and monks. Some damage was caused by an earthquake in 2010. It was then immediately handled by preserving especially the fragile building.

According to the history, Taklung monastery was built on top of a sacred site. The place was previously dwelled by Pottawa, a famous lama. Therefore, the land where the monastery stands now has been a religious site even since centuries ago. No wonder that the spiritual environment is very much alive here.