A precious temple of Potala palace, Jokhang, is one of UNESCO’s World Heritage list in 2000. It is the primary destination for Pilgrims from surrounding Tibet. Situated in central Lhasa, Jokhang temple covers six acre area.

Jokhang temple consists of 647 complexes. The temple was built in Tang Dynasty as per the request of Princess Burikuti to King Songstem Gampo. Originally, the complex included eight shrines only. The constructions then grows bigger as the results of multiple constructions during renovations. Some big repairs happened during the Yuan Dynasty, the Ming Dynasty, and the Qing Dynasty.

Previously, the site where Jokhang temple exists was a lake. The reason behind constructing a temple on top of the lake was because of many failed attempts in several other areas. the temple kept collapsing. The myth said that Princess Bhrikuti then asked Wen Cheng for advise. She then explained to Princess Bhrikuti that the geography of Tibet is like a hag, with the lake at the center. A perfect site for monastery would be on top of the lake. in order to do so, Wen Cheng tols to level the lake by filling it with the help of 1,000 goats to carry soil from far mountain. That is why it is called as Ra-Sa-Vphrul-Snang. Ra means goat, and Sa means Tibetan earth. Later, the place is well known as Lhasa, the Holy city. 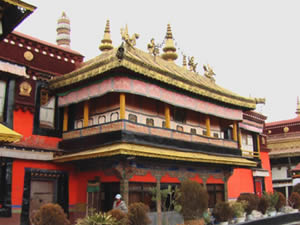 The beauty of Jokhang temple is built of four storey timber covered with golden on top. The architecture is a mixture of Tang Dynasty, Tibet, and Nepal style. The square of the temple consists of two steles. One is a symbol of the relationship between the Tibet King and the Tang Emperor; while the other is a place containing educational portrayal of how to avoid and treat smallpox.

To add the charm, rows of flicking lights in the eastern section along the yard lead the way to the main hall. The hall is the oldest shrine, more than 1,300 years old, of the structure. One precious treasure of Jokhang Temple is the Statue of Sakyamuni (age 12).