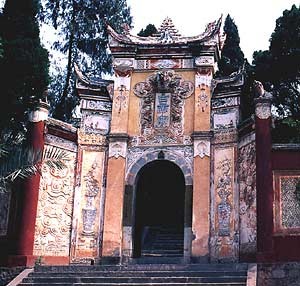 Situated at the entrance of the Qutang Gorge, northern shore of the Yangtze River, BaidiCheng (White Emperor City) is ne of the famous attraction with vermilion walls and flying eaves along the Three Gorge in the Fengjie County in Chongqing.  The town has a history of 2,000 years, and it is also called Ziyang County, which was built by Gongsun in the Shu-han period with a wealth of historic sites as well as numerous stone tablet inscriptions. 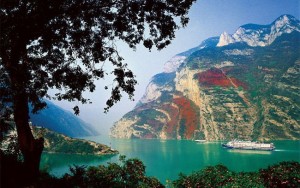 With mountain beside, water surrounded on three sides, Qutang Gorge in the back and Yangtze River in front, Baidicheng is characterized by grand and spectacular scenery. It is the best place to view the attraction of “Kui Men Tian Xia Xiong” in the Qutang Gorge. Known as Baidi Temple also, Baidi Cheng endows with many historical sites and cultural scenery such as the Mingliang Temple, the main building of BaidiCheng Temple, which is built in te 12th year of Jiajing Emperor’s dominancy (1533). There are statues of Liubei, Zhu Geliang, Guanyu and Zhangfei inside, whose are famous persons during the Three Kingdoms Period.  Besides, Wuhou Temple is also a famous attraction there, where three generations of the Zhu Geliang family are worshiped. Legend has it that Zhu Geliang used to watch the stars at night in the Duanxing Pavilion. You can also view the Guanjing pavilion and Wangjiang Tower there. 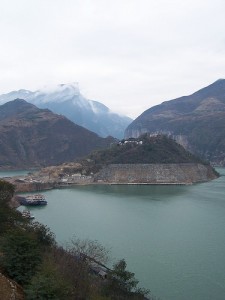 Du Fu, Li Bai, Bai Juyi, Liu Yuxi and Su Shi etc., lots of famous poets had visited the town , climbed Baidi Cheng and traveled around Kui Gate during their lifetimes and left a legacy of writing in praise of this historic town, which has become a city of immortal poetry. Among all of the poems, the most impressive and popular one is “Departure from the BaidiCheng at Dawn” written by Libai—”Bidding the Town farewell when morning clouds hang low. A long trip through canyons I made in a mere day. Monkey cries were heard on either bank all through the way. While the boat passed by mountains swiftly in a row.”  Which in Chinese are” 早发白帝城— 朝辞白帝彩云间，千里江陵一日还。两岸猿声啼不住，轻舟已过万重山”. With so many poets went there and so many poems left, BaidiCheng therefore is known as “Poem Town”.

With the landscape scenery and numerous historical sites, Baidicheng has been a must-see attraction for travelers from home and broad who take the Yangtze Cruise. Visitors can get into the city directly by cruise ships. So, just join them to enjoy the beauty of the majestic Baidicheng in the imminent spring!

What Make the Upstream and Downstream Cruises of the Yangtze River Different?