Su Dangpo, a famous Poet of Song Dynasty has compared the West Lake to Xi Zi, the most beautiful women of ancient chain in his composition. These poetic sentiments leave no one in doubt about the glory of the scenery of West Lake which inspired them.

West Lake was originally a shallow inlet of sea and due to the lying down of the silt the area of about 5.68 km has become the famous lake. The cultural landscape of this lake was initiated in the ninth century and it took its shape in the 13th century and has been thrived since 18th century. It has been the home of the Chinese culture, paradise of all strata of Chinese people and a famous lake in china for over ten centuries and has longest history and biggest influence. It was also listed in the World Heritage List in June 2011 by the Committee of 35th World Heritage Conference in Paris. 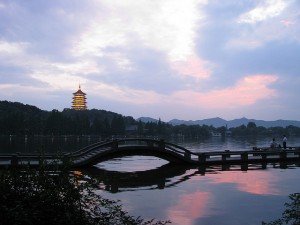 This lake has an average depth of five feet and comprises of five distinct sections. The largest part is called Outer lank which is bounded by the Yuehu Lake, North Inner Lake, Lesser South Lake and West Inner Lake. It is surrounded by hilly peak on its three sides and has been a center for attraction for centuries. The lake an its environment has all the elements of a traditional Chinese garden on a grand scale. The natural and strange shaped peaks, springs, forests, dense foliage and blossoms especial in the spring time are enhanced by the treasures of architectural and sculpture features.  All over the year, the panorama is very much pleasing to the eyes and the weather is intoxicating.

There are various features of this lake which are worthy to be noted. There is a man made island to the south of the centre of the Outer Lake which is known as island of Little Oceans enclosing four small lakes. You can get the views of Three Pools Mirroring the Moon at the night and when the night candles are lit you can see the impression of the reflection of three moons. The North Inner Lake and Outer Lake are ideal spots for admiring the vistas. The Tow Peaks Embracing the Sky is another sight when you will cross the lake by boat. 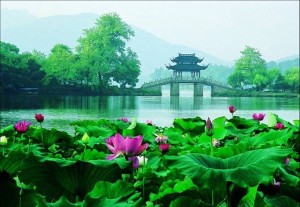